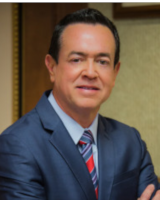 In life, a person’s experiences can shape their values, attitude, and often, their profession.

This has been the case for firm founder Joseph A. Ginarte.

To Ginarte, the success of his firm is directly attributable to a philosophy of hard work and commitment that was instilled in him by his parents when he was a boy growing up in Newark. Both his mother and father worked in factories, and when Ginarte was a college student at Kean University in Union, he too worked in a factory—as a full-time forklift operator—while completing his studies and earning summa cum laude honors. It was that working-class background that drove him to seek a law degree, which he went on to earn at Rutgers School of Law, so that he could represent workers.

“I grew up seeing workers getting hurt and not getting the benefits they deserved,” he says. “My father was a factory worker and I remember seeing him get injured and how it affected our family, especially since he was unable to return to work due to his injuries. I was drawn to the field.”

Joseph Ginarte launched his legal career in 1982, and in the ensuing years, has seen his practice expand into a full service trial law firm with a steadily growing staff of lawyers and support personnel. While many firms have downsized or laid off employees, Ginarte, O’Dwyer, Gonzalez, Gallardo, & Winograd, LLP has continued to grow.

The firm has also achieved numerous seven-figure outcomes for injured plaintiffs and in a variety of areas, including defective equipment, trucking accidents and medical malpractice.

“I think what makes our firm distinct is the years of experience that we have, and the personal attention we give our clients,” he says. “We’re committed to doing this work.”

“While a lot of firms have downsized or laid-off employees, our firm continues to grow and hire people. I think it’s because people know we’ll fight for them and that we’ll spend whatever it takes to take a case to trial.”

Ginarte’s work record and his commitment to his clients have also gained him recognition from within the legal profession. He has been an appointee to the New Jersey Supreme Court’s Civil Practice Committee and is also a former president of the Top 100 National Trial Lawyer by the National Trial Lawyers Association. Ginarte is admitted to practice law in New York, New Jersey and Washington, D.C.

His outside interests involve charitable work and donations to nonprofit organizations, particularly in New York / New Jersey. He also enjoys golfing and rooting for the New York Yankees, New York Rangers and the New York Knicks.

The personal injury attorneys at Ginarte Gallardo Gonzalez Winograd L.L.P. understand your concerns, because we help people just like you. We realize the devastating effect an injury has on your life, ailing you physically, psychologically and financially. In fact, it was the work injury of Joseph Ginarte’s father that led him to pursue a legal career, and was instrumental in the founding of our firm. His father was a factory worker, and the injury he suffered prevented him from returning to work. Ginarte recalls how his father’s work injury affected his entire family—these memories help form the caring and empathetic foundation our firm is built upon.

With over 150 years of combined experience, our attorneys at Ginarte Gallardo Gonzalez Winograd L.L.P., represent clients throughout the New York and New Jersey metro area with offices conveniently located in Manhattan, Queens Newark, Union City, Elizabeth, Clifton and Perth Amboy. Our team of 30 attorneys concentrates on a variety of legal matters, including personal injury, construction accidents, workers’ compensation, car accidents, truck accidents, premises cases, medical malpractice and Social Security Disability. With this wide skill-set, and years of experience backing us, we are equipped to provide you with the knowledgeable and professional legal advice you need.

In addition to our skilled attorneys, Ginarte Gallardo Gonzalez Winograd L.L.P., also has a 100-plus person support staff. Our attorneys and staff are available at seven convenient offices, so no matter where you are in the New York or New Jersey metro area, we have a location near you. We offer free consultations at all of our offices, so you can come in, and speak to a legal professional about how we can help you. Unable to come to one of our offices? We will come to you, whether at your home, or in the hospital.